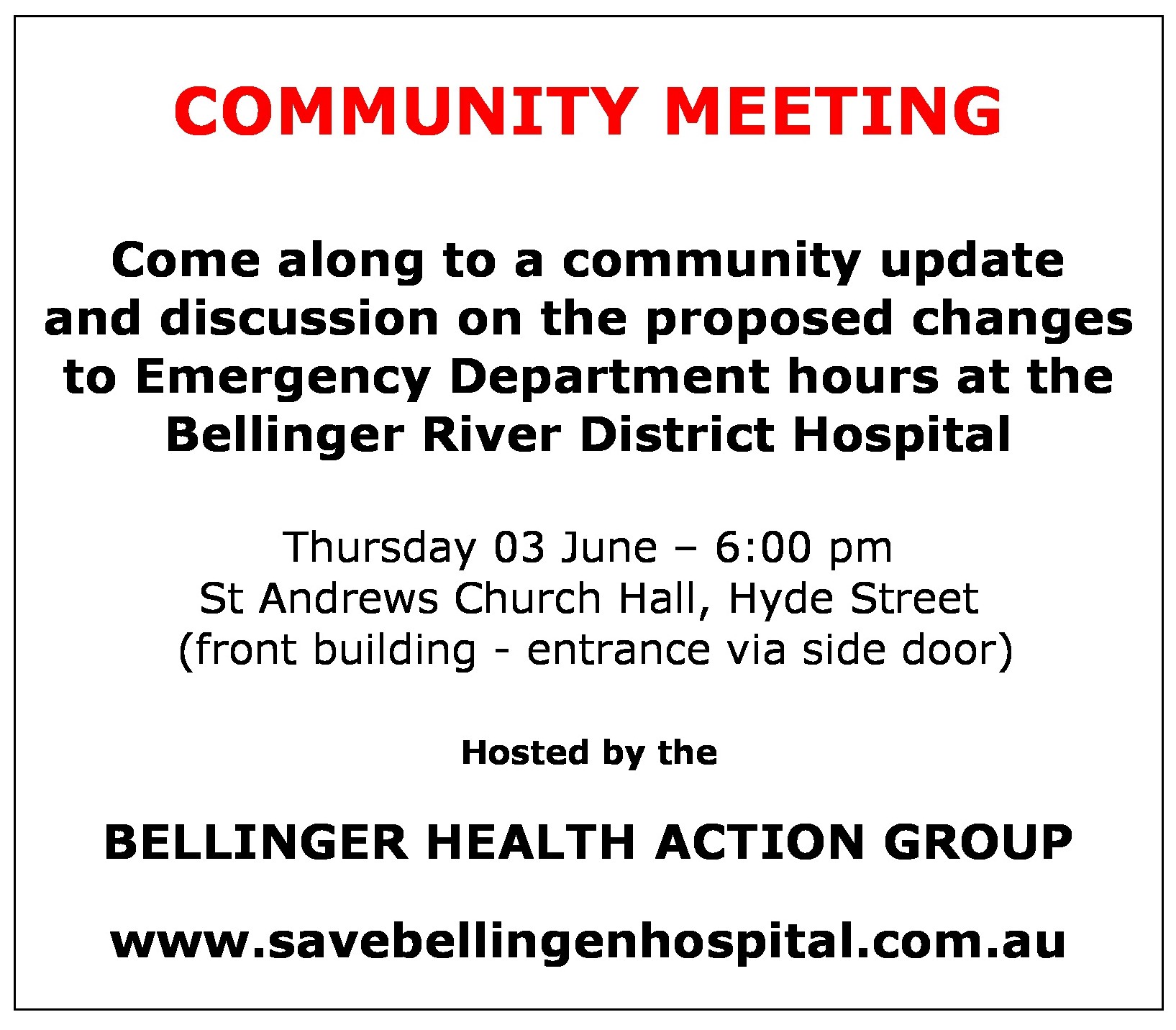 For nearly 9 months the Visiting Medical Officers (VMOs) and the Mid North Coast Local Health District (MNCLHD) have been in discussion in relation to staffing issues at the Bellinger River District Hospital.

Several weeks ago Dr Andrew Heslop released details of the VMO issue to the public and the media via Facebook and various other media platforms.  A copy of his statement is attached below in case you missed it. The resulting social media storm has had the desired effect and appears to have pressured the MNCLHD into engaging more co-operatively with the VMOs.

The MNCLHD has now agreed to flexible contracts, is meeting with local doctors who have expressed interest in working at the hospital, and is in discussion with the Agency for Clinical Innovation.  There is another VMO meeting scheduled for this Wednesday morning, and a get together with prospective VMOs on Wednesday evening, and this is all progress in the right direction.  However, this does not mean that the proposal to close the ED after hours has been withdrawn.

We encourage you to attend the community update and discussion on Thursday 03 June at 6:00pm at St. Andrew’s Church Hall in Hyde Street, Bellingen. The hall is the building fronting Hyde Street, entrance will be via the side door.

Note: we will be operating a COVID-Safe environment and will ask you to either sign-in manually, or use the QR code provided . Seating will be 2 metres apart.

The following article appeared on the Bellingen Courier-Sun website – 24 September, 2020

A public forum was held in the Memorial Hall regarding rumours that the hospital was to be closed & converted to a Multi-Purpose Service (MPS) Facility (glorified Nursing Home). Many concerns were raised by the audience & one of those was the Accident & Emergency Department. Both Doctors & nursing staff stated that it required upgrading, refurbishing & expanding. I quote the following extracts of concerns raised during that forum in 2008.

Nursing Issues: There is no privacy in Emergency Department. No private room for interviews during admissions/ triage

Questions from the audience:

The Emergency Department has many problems. Only 3 beds & all open in one large area. No privacy for treatment or interviews. Elderly are often hard of hearing & all the world hears. Margaret Bennett also quoted the increase in the 3, 4 & 5 category levels of Triage (these are not life threatening categories) due to the difficulty patients have in accessing their local GP.

Margaret Bennett was the spokesperson for the then Chief Executive of the Health Service (Chris Crawford). Her repeated response to all the concerns raised was “This is a challenge”.

A Public forum organised by the North Coast Area Health Service where the CE (Chris Crawford) implied that due to the poor state of hospital infrastructure & the decline in presentations (based on statistical evidence) for both the Maternity & Emergency departments services may be reduced. The community was in uproar. Shortly after this public forum Chris Crawford announced that he intended to close the Accident & Emergency service at Bellingen hospital between the hours of 11pm & 7am every day of the week. Once again the community was in uproar.

Dr Deirdre Little researched the statistics & stated that there was a misrepresentation of Bellingen Hospital’s Accident and Emergency presentations over the last 4 years, and the NCAHS down-grading of the number and trend of these presentations.

The ability to count heads and the ability to analyse data are the first casualties when NCAHS decides to axe a service.
E.g.:

1. North Coast Area Health Service (NCAHS) reviewed our acute emergency presentations over a four year period and printed their review in a February 2010 document “Review of North Coast Hospitals 2009-2010”. Between 2005 and 2008, from NCAHS’s own figures, there was a 15% increase in acute presentations to the emergency department of Bellingen Hospital.
2. NCAHS looked at the same figures and said there was a 2% rise in A. and E. presentations.

How did they get it so wrong?

After Dr Little’s statistical research proved to be correct the threat to reduce the operational hours of the A&E department dissipated & then disappeared. It did not ever close its doors.

BHAG met with the new Chief Executive (Stewart Dowrick) of the newly established Mid North Coast Area Health Service. We were advised that the ED was to be re-designed etc. & that $400,000 was available in 2-3years time.

Preparations are finally underway for the work to commence the refurbishment, upgrade & extension to the Emergency Department at Bellingen Hospital. From 8am on Wednesday 13thFebruary (this week) the ED will be relocated to other wards in the hospital.

Even though there is no increase in the number of beds in the ED the new internal design is an improvement on the existing layout. No doubt the budget would not stretch any further!

Whoopee!!  Yes more changes & another good news story for Bellingen Hospital where the current Emergency Department is undergoing an expansion & refurbishment. It will take about 3 months to complete & the $400,000 to undertake this work is being funded by the NSW State Government.

At 8am on Wednesday morning 13th February 2013 the Emergency Department (ED) also called Casualty will be temporarily relocated to wards 7, 8 & 9 in Hewitt Block (main building) at the Bellinger River District Hospital.  All the existing emergency services we are familiar with will still be available – just in some different rooms.

There will be signage displayed to show you where to go.  If you need to see a Dr during normal weekday hours go to the main reception area to book in as usual & wait in the same waiting area.   If you need to see a Dr after hours go through the normal main double doors near the Ambulance bay & wait in the same waiting area.  This procedure has not changed & a nurse will attend to you ASAP. The same friendly & highly skilled nurses & Doctors will be on duty 24hrs a day, 7 days a week.  They will just be working in another area of the hospital.

When you walk through the main double doors look straight ahead & this is where Wards 7, 8 & 9 are located (now the ED).

The new ED will still have 3 examination beds however one will now be in a private room where procedures can be undertaken in privacy & there will be an additional hospital procedure chair.  There is a refurbished room for the Triage Nurse, a new bathroom for patients & new secure store & utility rooms.  155 square meters is being upgraded and an additional 30 square meters constructed to provide an overall area for the ED of 185 square meters. The overall increase in floor space is approximately 20%.  During a public forum in August 2008 Doctors publically stated their concerns about the poor layout of the ED.  It is now being addressed.

We would ask everyone to be understanding & patient during all the construction work especially with the obstruction to internal road traffic & for pedestrians to be careful when walking on these roads.

The other building works for the 14 bed Sub-acute wing is progressing well.  The frame work for the first floor (where the wards are located) will commence in the next couple of weeks.  Before we know it there will be a roof over the new building.

Thank you to all in our community who continue to support Saving Our Services (SOS) at Bellingen Hospital.